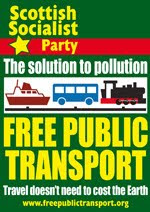 In the early 1980s, the Greater London Council under Ken Livingston slashed fares and began to move towards free public transport. The policy was backed by 71 per cent of Londoners, but was destroyed by the Thatcher government and the Law Lords, backed by the car, haulage and oil industries.
Within a year, ticket prices in London had doubled, car journeys had rocketed and there was an extra 6000 accidents on the city’s roads. A similar policy in South Yorkshire under David Blunkett was similarly torpedoed.
That was before global warming and the dangers of greenhouse gases became widely accepted by scientists. Twenty years on, our towns and cities are heading towards permanent gridlock and scientists are pressing the panic buttons. And the idea of free public transport is starting to make a comeback. Read more