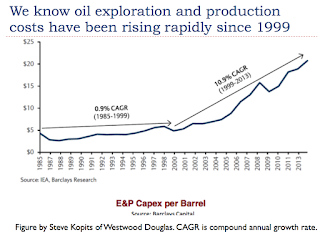 Our Finite World: "Oil companies tend to extract the cheapest and easiest to extract oil first. Eventually, they find that they need to move on to more expensive to extract fields–even with technology enhancements, costs are rising. "
at 12:54 PM

Email ThisBlogThis!Share to TwitterShare to FacebookShare to Pinterest
Labels: #netenergy

BBC News: "The global market for foodstuffs is depleting water sources in many parts of the world quicker than they can naturally be refilled."
at 12:12 AM

While many are focused on reducing emissions, heat continues to be generated by human activity. Living uses energy, converting it to heat. The source does not matter, if activity grows, heat increases. This heat now threatens to release tons of carbon. That will make of mockery of attempts to reduce emissions.
at 4:37 PM

Bloomberg explains why #IslamicState must be fought

Bloomberg: "The semi-autonomous Kurdistan Regional Government says the area’s reserves could total 45 billion barrels, more than Nigeria’s, and Kurdish crude is generally cheap to extract. When foreign investors tramped into the region’s oil fields after the fall of Saddam Hussein’s regime, the crude was so abundant it seeped from the ground beneath their feet. Tony Hayward, former BP Plc boss turned wildcatter, called Iraqi Kurdistan “one of the last great frontiers” in the oil and gas industry as his new company Genel Energy Plc started prospecting there in 2011. Ashti Hawrami, natural resources minister for the KRG, has spoken of increasing exports to 1 million barrels a day or more."
at 5:27 PM

The faulty thinking behind "decoupling"

World Economic Forum: "But we would argue that what people are observing (and labelling) as decoupling is only partly due to genuine efficiency gains. The rest is a combination of three illusory effects: substitution, financialisation and cost-shifting.

...Many other factors that are not captured by GDP affect well-being. These include the distribution of wealth and income, the health of the global and regional ecosystems (including the climate), the quality of trust and social interactions at multiple scales, the value of parenting, household work and volunteer work. We therefore need to measure human progress by indicators other than just GDP and its growth rate.

The decoupling delusion simply props up GDP growth as an outdated measure of well-being. Instead, we need to recouple the goals of human progress and a healthy environment for a sustainable future."
at 5:18 AM

Paris Accord Could Make the World Richer - and therefore hotter

Bloomberg Quint: "Investments in renewable power and energy efficiency will add about 0.8 percent to global gross domestic product by 2050, the International Renewable Energy Agency, or Irena, said Monday in a report produced for the German government... "

The only policy that addresses both heat and emissions is managed degrowth. We should encourage falling birth rates with:
Make cities car-free, educate all children, and provide good healthcare.
at 11:29 AM

masstransitmag: "The 2017 Infrastructure Report Card, released by the American Society of Civil Engineers (ASCE), gave U.S. public transportation a D- grade, even as it acknowledged the growth of demand for public transit."
at 12:23 AM

Oil caught in fallacy of composition

There is no good price for oil. If high, economy slows and demand drops. If low, individual producers increase production to keep cash flowing, driving price below cost.

1. No one wants to volunteer to lose money selling oil under cost.

2. Oil is the fuel of transport and sprawl, the essence of consumer capitalism. Trillions in infrastructure is dependent, and there is no easy substitute. Price hikes needed by producers trickle through the entire economy.

So the obvious solution is to get off oil.

But capitalism won't do it, can't do it. Because of its competitive nature, it will exploit any profit seam until collapse.
at 12:32 AM

The autosprawl industry has fooled voters for many years with various coalitions of racism, religious extremism, and phony fiscal conservatism. One elected, they resume the attack on public transit. Public transit, implemented properly, exposes the subsidy of the autosprawl system. Once people have choice of travel they see that subsidy of cars is an unnecessary burden.
at 10:54 PM

ABO: "Today the country's total installed capacity from coal is over 900 GW, and another 200 GW will soon be added. According to Laura Cozzi, the IEA’s principal analyst, coal will continue to supply over half of Chinese energy consumption at least until 2030. Nonetheless, a new course is being charted for Chinese coal, with plans to cut 2,400 million t from obsolete plants by 2020 and develop "clean coal" through the use of carbon capture and storage technology (CCS) for an annual output of 500 million t. At the same time, the government is betting on renewables by bringing their share of China's energy mix up to 30% during the same period."
at 7:05 PM

Email ThisBlogThis!Share to TwitterShare to FacebookShare to Pinterest
Labels: #renewables

GOP to America, "Get in the car. Now"

Rail News : ""From San Diego to Los Angeles to numerous projects in the Bay Area, Californians across the state have benefited from a strong federal presence in public transportation,” said Michael Wiley, chair of the California Transit Association's Executive Committee and former general manager of the Sacramento Regional Transit (RT) District, in a press release. "Sacramento RT's south line light rail project, which was built in two phases, received two federal grants totaling $245 million. Without those funds the 15,000 people that ride that line daily to work, school, shopping and to the new Golden 1 Arena, would be stuck in traffic adding to congestion.""
at 5:19 AM

US still bombing Muslims for oil, while #publictransit decays

progressiverailroading: "The report noted that the nation's transit systems have been "chronically underfunded" and collectively face a $90 billion backlog of infrastructure rehabilitation needs. This year, the report's transit section included commuter rail, which was included in the "rail" chapter in the 2013 report card.

"Transit in America continues to grow, carrying 10.5 billion trips in 2015 and adding new lines and systems every year," the report stated. "Yet the symptoms of overdue maintenance and underinvestment have never been clearer.""
at 5:39 PM

There should be no debate about degrowth.

The laws of physics supersede all human effort.

Humans have surpassed the limits of growth and degrowth has begun.

The purpose of a degrowth movement is to reduce the pain.
at 2:47 PM

Cause of current mass extinction? Roads 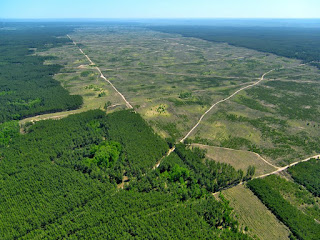 Mother Nature Network: "The No. 1 cause of modern wildlife declines is habitat loss and fragmentation, representing the primary threat for 85 percent of all species on the IUCN Red List. That includes deforestation for farming, logging and settlement, but also the less obvious threat of fragmentation by roads and other infrastructure."
at 4:06 PM

Email ThisBlogThis!Share to TwitterShare to FacebookShare to Pinterest
Labels: #eco

US Govt theory of 9-11 building collapse is physically impossible

Europhysics News Indeed, neither before nor since 9/11 have fires caused the total collapse of a steel-framed high-rise—nor has any other natural event, with the exception of the 1985 Mexico City earthquake, which toppled a 21-story office building. Otherwise, the only phenomenon capable of collapsing such buildings completely has been by way of a procedure known as controlled demolition, whereby explosives or other devices are used to bring down a structure intentionally. Although NIST finally concluded after several years of investigation that all three collapses on 9/11 were due primarily to fires, fifteen years after the event a growing number of architects, engineers, and scientists are unconvinced by that explanation.
at 5:04 PM