Renewables all used up by growth 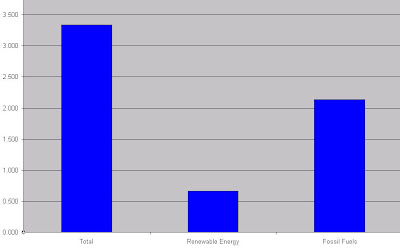 The above graph is derived from the EIA data linked below. It shows the growth in energy consumption in the U.S. from 2003 through 2007 in quadrillion BTUs. The first bar is the total increase over the 5 years. Also shown are (non-nuclear) renewable and fossil-fuel components of that total. Renewables increase was less than 1/3 that of fossil fuels.

Email ThisBlogThis!Share to TwitterShare to FacebookShare to Pinterest
Labels: #renewables

At the same time, there is evidence that job subsidies encourage companies to move to areas that are inaccessible for many urban working families. In our study, Another Way Sprawl Happens, Good Jobs First examined the movement of companies to Anoka (an outer suburb of Minneapolis), which had offered them free land valued at more than $7.5 million. This resulted in the movement of 29 companies with 1,600 jobs to a 300-acre industrial park. The net result of the subsidized relocations was to move the jobs away from the region's largest concentrations of people of color, away from pockets of poverty and away from households receiving public assistance. Read more at: GoodJobsFirst 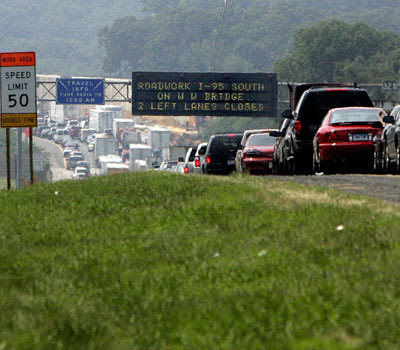 Maryland Traffic - Photo Jim Watson/AFP/Getty Images
In a thorough, well-researched, and prescient article, Ben Ross of Maryland's Action Committee for Transit clearly lays out the insidious nature of the "Lexus lane." The Lexus lane and road-pricing in general are an attempt by so-called "conservatives" to reconcile their alleged free-market philosophy with their unquestioning support of highway pork. This article is must reading if on first glance you think tolling and privatizing highways are a plausible market solution to traffic congestion.

....These survey results suggest that the "Lexus lanes" moniker is well deserved. Who uses pay lanes is mostly determined by income. For most of the people in the free lanes, consumer sovereignty is a fiction. They haven't made a voluntary decision that their time isn't worth the price of a quicker commute. They are sitting in traffic jams because the toll exceeds what they can afford to pay.
Even if this is true, toll lane supporters respond, the lanes still benefit lower-income drivers. Those who can't afford to use the new lanes benefit from the added road capacity tolls pay for. With the wealthy on the new lanes, fewer drivers are squeezed into the free lanes, and everyone has a faster commute. The argument is logical, but it does not fit the facts. It turns out, excepting rare circumstances, that express toll lanes added to existing highways cannot raise anywhere near enough revenue to pay for their construction cost....Dissent Magazine

Email ThisBlogThis!Share to TwitterShare to FacebookShare to Pinterest
Labels: #roadpricing

Australia may be first nation with free public transport

The fare-free movement in Australia is gaining momentum. It is hard to keep up with all the changes. In the last several months there has been much debate and even more action. Free public transport has been established in cities and territories for students and seniors. But now, New South Wales is considering making it free for all riders. And in the latest news Northern Territory is also considering the same. Bus Industry Confederation Chairman Scott Grenda has suggested it be tried nationwide.

When public transport is free for all riders, a sudden jump in the benefits is realized. The costs of collecting, tracking, and enforcing fares all go away. Further, as usage increases, there will be demand for more frequency of service. Also, the public, with this common investment in the common good will demand expert and accountable management of transport.

This is a chance for Australia to leap ahead in economic and environmental success.

The Green Party of Aotearoa New Zealand is making progress towards adopting free fares as one of its policies. There are still several hurdles to jump, but two have already been crossed successfully and the next stage is likely to start in June, when all members will be invited to join an ‘issue group’. The ‘IG’ will aim to develop a paper (put to conference in February) into a policy for member approval. If approved, the policy could be adopted by March 2010.

Success is by no means assured. It depends who joins the issue group and what influence they have. The more fpt supporters who get involved, the better the chances.

The essential case is that the Kiwi transport takes a much higher proportion of the oil supply than most countries, has an unusually low level of public transport use and that, to achieve Green climate change and peak oil policies, public transport has to take a much bigger share. Fares are a significant disincentive to that. Often it’s cheaper to drive. Furthermore, the hassle of buying a fare and the time taken to do the transaction create further disincentives. In terms of cost, abolishing fares would not greatly increase the current subsidy to public transport and savings would be made on road schemes from congestion relief and on the health costs of crashes.

The case against is that Wellington, the most successful public transport system in the country, also has amongst the highest proportion of costs met by fares. The few free services don’t attract many more passengers than the fare paying services. Several generations have been used to thinking of cars as the only form of transport and very few have heard of the concept of free fares, and even fewer given it much thought. Most still think of public transport as a social service, rather than an environmental necessity, and the quality of speed and frequency reflect that. The Auckland to Wellington train takes half an hour longer than the bus. Many large settlements have no bus.

Having free fares as a Green policy will bring the concept to many more people, but there will still be a long way to go to get the policy implemented. Any help would be welcome.

...How much would it cost? A lot less than the billions being thrown at Wall Street. In 2010, SEPTA expects to collect about $400 million in passenger revenue. Chump change in the new Washington, especially compared to the $1.1 billion it will spend. Not having to collect fares will certainly save a big chunk of change...
...Instead of spending billions to redo the South Street Bridge - scrap it. Build a walking and biking bridge. I don't know if anyone has noticed, but the Schuylkill Expressway runs a lot better without a South Street exit and entrance - they were death traps anyway...
Philadelphia Daily News  [see the new fare-free Philly blog ] 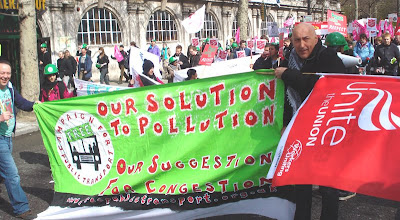 Campaign for Free Public Transport at G20 Meeting
at 8:23 AM 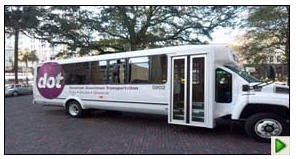 
...Peter Cranie, the main Green Party candidate in the North West in the forthcoming Euro elections was the first to make a contribution and announced that he now supported the policy of free public transport on a local level as opposed to the one he and other Greens had previously supported which called for public transport to be simpy "cheap and affordable". ...

St. Louis County has decided to install a "Michigan Left" intersection at Manchester and Hanley Roads. The price tag? $50M.

Click Here to watch "Taken for a Ride" on Google Video
at 3:52 PM

Cost of driving in the U.S.

While actual costs vary from place to place and depending on fuel prices, after some analysis I’ve arrived at some staggering conclusions. When multiplying the average cost per mile of $1.28 (by default assuming current prices of about $2.25/gal) by 240 trillion yearly vehicle miles traveled (VMT), which is a rough estimate of the current total, and America’s total yearly cost of driving is $3.7 trillion , or a whopping 25% of our GDP (the actual yearly figures are likely in the range of $3.25-4 trillion). Just pause and think about that for a second: one out of every four dollars in America is spent on driving. Should Americans have to spend that much on transportation? What does this mean for lower income Americans? Also, a 10% reduction in driving would save up to 400 billion per year, and a 25% reduction would save almost one trillion per year. Twenty-first Century Urban Solutions.

1. We limit the emission of carbon dioxide and other greenhouse gases (about 45 percent of those emissions come from cars), in effect, reduces the number of illnesses from cancer, asthma and other respiratory diseases, whose level rose rapidly with the expansion of the car. It should also be taken into account the pollution emitted by refineries and car factories.
2. Eliminates congestion and reduces the noise, which improves the quality of life.
3. We limit the release of toxic chemicals into rivers and seas.
4. The overall consumption of crude oil, gasoline and diesel fuel, and thus save on imported oil. The risk of global warming should dispel remaining doubts.
5. In connection with the resignation of the ticket printing saves paper and collection device maintenance.
6. Breaking down barriers for people with less financial well-off, to prevent the isolation of many communities.
7. Reduce inequalities between the road infrastructure, subsidies for individual users and for users of public transport.
8. Reduce the need for new road infrastructure.
9. Expanding the tourist attraction of our region. Our contribution to the development of the local economy because more money is on the spot.
10. Saves on the cost of driving on the criminalization gapę not paid investigators, bailiffs and the courts for their services.
11. Roads are become safer, and thereby reduce spending on emergency services and treatment of victims (the vast majority of accidents are linked to automobile traffic).
12. Simplify the accounting firm transportation saves on tape.
13. We create new jobs in the production and use trams, buses, trains.