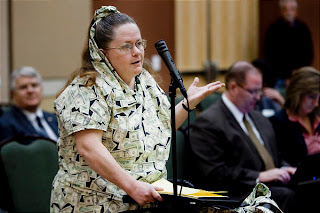 DeseretNews Photo
Tammi Diaz, one of the bravest and most consistent advocates of better transit service is herself a victim of the reckless auto-system. In spite of her injuries she continues to fight for fare-free transit and better service for handicapped and all transit riders. Here she addresses the UTA board in Salt Lake City. If you live in the area you should follow her blog.
at 12:23 AM

Miller advocates TARC having a large, broad-based ridership. Instead of reducing service and contemplating rate increases, he supports increasing service and lowering the fare (can you say “FREE”?) to make our mass transit serve our citizens, our ecology and our business needs, rather than trying to squeeze the last out of this vital public service on the backs of those that need it most. “Who wouldn’t take advantage of a free or nearly free bus service, keeping traffic down, lessening road repair needs, reducing pollution, lowering traffic management costs and making untold other contributions to our quality of life?” he continued. ”Have you seen the crowds on FAT Friday or the Museum Hop? Can you imagine full busses of customers being delivered every day to our local businesses all over the metro area?”

He believes we need to subsidize TARC to at least the same level, and hopefully much higher, that we already subsidize private auto and truck transportation, and we will all reap the dividends for years. WFPL

NATIONWIDE – Riders who rely on public transportation and transit workers across the country today launched a series of actions over several days to rally support for emergency funding to prevent draconian service cuts, layoffs and fare hikes in more than 150 systems nationwide.

Members of the Aberdeen SSP branch were out leafleting in the city centre yesterday, on what turnout out to be a sunny, enjoyable and successful afternoon! As part of our campaign to support SSP candidate Ewan Robertson for Aberdeen North in the general election, our central arguments were that we must oppose public spending cuts aimed at making the majority of the population pay for an economic crisis created by the bankers and politicians at Westminster, as well as arguing for the withdrawal of troops in Afghanistan and the need for a locally-owned, free public transport service in Aberdeen rather than the current rip-off service from privatised First Bus. If you want to come and speak to us or support us during the campaign, we will be having a stall at Aberdeen University this Wednesday, a meeting in the Belmont cinema cafe downstairs this Wednesday evening, and more stalls in the city centre this coming weekend.  AberdeenSSP

Here is a simple question for the advocates of reducing carbon emissions via market incentive. What if your plan works and our wasteful system is preserved? We will answer for you. When the plan reduces emissions 20% and the autosprawl system has been essentially preserved, and the majority of the negative externalities are still borne by the poor, there will be room for 20% growth. We will have gotten nowhere, and time will have run out.
at 1:42 PM

What will happen when transit is free

Seniors, aged and disability pensioners have taken almost seven million trips on public transport in the first year of a free transport scheme in Western Australia.

Seniors taking advantage of the State Government’s initiative and using public transport regularly could also be saving between $350 and $600 a year.

“As people get older it is important they maintain an active lifestyle. Seeing so many people are taking advantage of free public transport gives a strong indication many seniors and pensioners are doing just that,” Volunteering Minister Robyn McSweeney said.

“Free public transport for seniors also represents a social good, by which the state is repaying Western Australians who have paid their taxes and contributed so much to the State for so long.”

Moronic US culture dumps on Blagojevich while EU seeks progress

Over 66s free travel pass should be extended Europe-Wide

The EU should provide free public transport to all senior citizens, by extending the successful Irish model to all 27 EU member states, Nessa Childers MEP has told the EU Transport Commissioner today.

"I proposed today to the new Transport Commissioner Siim Kallas the extension of free public transport for older people across the EU. Regardless of what country they come from, are living in or are even visiting, older people across Europe should have those same basic set of transport entitlements as their Irish counterparts. What better place to start than an EU-wide bus & train pass?  Nessa Childers

Email ThisBlogThis!Share to TwitterShare to FacebookShare to Pinterest
Labels: #blago

Thanks for reconsidering the merits of free public transport.
But let’s have a look at some of the old myths you raise.
Your scenario of “a free ride on a very crowded and old bus each day” has never been part of the proposal advocated by proponents of free public transport.
Fare-free transit presupposes that the public transport system would be efficient, totally integrated, frequent and of a very high standard – using comfortable, modern low-emission vehicles. Such a new network would require at least three times the number of buses we now have in Auckland, plus a decent electrified rail service & support infra-structure for starters. Good user-friendly amenities for cyclists and pedestrians would also be a vital component.
It took the Belgium city of Hasselt several years to get it’s bus services up to a quality standard before they introduced zero-fares twelve years ago – and now everybody gets about the city easily, with no traffic congestion – which had been a serious problem previously.
Your tired old cliche about ‘vagrants’ would be easily overcome by engaging public transport ‘ambassadors’ to assist passengers and deter anti-social behaviour… again, as they do effectively in Hasselt. And there would be no incentive for assaults on drivers as there would be no cashbox to rob and no disputes over fares! The driver will be free to do his/her job – get everyone to their destinations safely.
[Chris N outlines other benefits very well... have another look at what he says.]
Yes, of course it will cost alot of money. But introducing fare-free, quality public transport would cost a fraction of the billions currently wasted on extremely expensive motorways that we all know will be clogged up again in no time – and, to make matters worse, now this government is allowing up to 5000 extra-super-rigs to churn up the roads and increase the road toll even more – and guess who’s going to get the bill for all of this mayhem? …not to mention the extravagant cost of these proposed new flash ticketing systems for the current inefficient, worn-out bus & rail system.
Supporters of the status quo and car dependency never seem to factor in the appalling costs of the carnage on the roads – another 10 people perished over Easter weekend, and another several dozen mangled bodies ended up in hospital. Then there’s the phenomenal rising health costs and human suffering due to pollution problems – much of which comes from the abundance of cars clogging our roads each day. There is also the issue of increased costs & waste of precious fuel.
No – we should see decent public transport as an important, free & easily accessible public service, with funding shared by all for the common good, like many other public services – not as some sort of burden.
It’s time to make major changes to get people out of cars and to let us get about the city in a civilised & sensible manner. Traffic chaos is literally killing hundreds of people and making city life unsustainable & miserable.
Much of our public transport is already subsidized by taxes and road user charges – why not up-grade it properly and cover the costs collectively? In Hasselt the residents rates decreased after free buses were introduced and the city flourished. Auckland too could lead the way as truly ‘world class, clean, green, pleasant city’ and a fine example for others. I’m sure that the resulting increased numbers of tourists would be happy to contribute to the cost of their ‘carbon-footprint’ by paying a special vistors’ levy to help with the nation’s transport costs too.
If your readers wish to follow up on these issues, there are dozens of free public transport blogsites around the world, and everyone is welcome to check out our New Zealand site at: farefreenz.blogspot.com
Email address: farefreenz@clear.net.nz
For rational mobility,
Roger Fowler
Editor
Fare-FreeNZ
comment posted on http://transportblog.co.nz/2010/04/06/free-public-transport/
at 9:19 PM

16. Changing topics, in general, do you think government efforts to reduce traffic congestion in the Washington region should be focused more on expanding and building roads, or on providing more public transportation options, such as trains or buses?

Another 19 Billion for autosprawl - make it STOP!

> Deposit $19.5 billion into the Highway Trust Fund to reimburse the trust fund for interest payments not received since 1998. This will ensure the trust fund's solvency into next year. Planetizen