Young people in the US cannot afford cars

TransUnion: Auto Loan Delinquency Rate and Debt Rise Again: "CHICAGO, IL--(Marketwired - Nov 24, 2014) - Auto loan delinquency rates jumped nearly 13% in the last year to close Q3 2014 at 1.16%. At the same time, auto loan debt rose for the 14th straight quarter to $17,352. The latest TransUnion auto loan report also found that delinquency rates increased most for the youngest population subset with those under the age of 30 seeing a nearly 18% rise."
at 4:10 PM

Social media is controlled by the coupon-clippers

Many people use social media to try to save ourselves from energy waste and energy wars. The solutions we suggest threaten the income of bond holders.

They control social media and their strategy is to eliminate anonymity.

If they succeed, the discussion can be turned away from ideas and to personalities

Then they can apply the carrot and stick.
at 9:34 AM

Congress would rather you drive to work than take public transit

The Washington Post: "The federal tax code has a weird way of favoring people who drive to work over those who take public transit there. If you're a driver, the federal commuter benefit allows you to spend up to $245 of your pre-tax income each month on parking at work. If you pay to take the bus or train instead, the benefit is only about half that — $130."

Cars are a waste of money. Here is the documentation.

We have collected links on our "library" blog. These documents provide ample research to show what should be intuitively obvious. Cars waste. They waste money, resources, and finally, the biosphere.
Here is the link to the library http://fptlib.blogspot.com

Oil Change : "by providing subsidies for fossil-fuel exploration, the G20 countries are creating a ‘triple-lose’ scenario. They are directing large volumes of finance into high-carbon assets that cannot be exploited without catastrophic climate effects."
at 2:52 PM

You were a #freetransit advocate, Rev Billy, what happened?

truthout : "The "transportation sector" has not slowed down even with bankruptcies and throat-cutting air bags and sudden electrical shut-offs at high speeds. We are still driving 250 million vehicles in the US, increasing the miles and number of vehicles every year, with the knowledge that we are killing ourselves. Then again, we put the poison into the Earth as individuals. It is a personal decision to keep driving. So there is an intriguing opening here – the fact that driving could be stopped as a wave of personal decisions."
at 10:00 AM

AL.com: "You need not be a fan of urban buses or high-speed trains to have concerns about transportation funding and infrastructure in Alabama. There's also a crisis looming for folks committed to roads and bridges. Federal and state gasoline taxes, which support these projects, haven't been adjusted since the 1990s and aren't indexed for inflation. Unless policymakers act, rising construction costs and dwindling funds will lead to more potholes and greater risk of a bridge collapse.
Transportation policy affects nearly every aspect of life in Alabama, from urban traffic jams to rural residents' ability to get health care. Whether a person cares about foreign oil dependency or wants ideas for job creation, transportation policy touches on economic concerns as well as social justice.
Every merchant wants customers to be able to get to the store to do some shopping. Every employer wants workers to be able to get to work on time. And every Alabamian wants to be able to get around, whether the trip is a crucial errand or just a social call.
Transportation is at the core of these overlapping concerns. Yet our current system seems to suggest that if you don't have steady access to a car or truck (along with the money to buy insurance and put gas in it), your time matters quite a bit less.
This is no way to run a state. Elderly Alabamians who can't drive shouldn't be cut off from the rest of society. Folks who can't afford a vehicle shouldn't be forced to rely on family or neighbors to get around. People with disabilities ought to have the option of taking a quick, reliable and reasonably priced bus to their destination. Other places aren't perfect, but many have figured this out and offer mass transit options that create more opportunities for everyone to participate in modern life."

Email ThisBlogThis!Share to TwitterShare to FacebookShare to Pinterest
Labels: #planners

Zory information: "In Żorach held International Conference. Free public transport in the world. The debate was attended by representatives of cities from all over the world. Among other things, the Chinese Chengdu, Estonia Tallinn, the Italian Trentino and Latvia Jurmala.

On 6 November 2014. Twinpigs Western town in Żorach has become an arena for exchange of views on free public transport. The conference was addressed mainly to representatives of local governments, but also institutions and companies involved in the transport industry. The purpose of the meeting was to disseminate knowledge about free transport. Cities that have implemented such solutions, presented their benefits. In addition, it was an opportunity to exchange experiences and engage in a debate on issues of the functioning of free transport. International Conference was opened by the Mayor of Zory Waldemar Socha."
at 4:52 PM 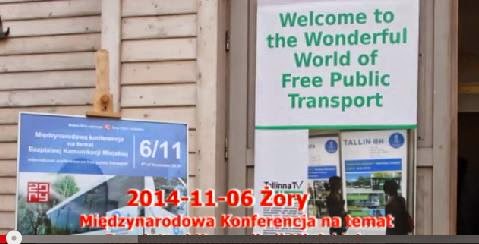 Zero Hedge : "As the chart below shows, US trade excluding Petroleum, just tumbled to $48.3 billion, essentially matching the worst print in the history of the series, suggesting that portrayals of the US as a resurgent export powerhouse are completely erroneous, and that instead the US is as big a net importer of goods and services, aside from the Shale revolution of course, as ever."
at 10:04 AM

Resource Insights: : "It turns out that between consumers who can't afford to pay higher and higher oil prices and companies which can't afford to produce the extra oil we'd like at lower prices, we are stuck in an ever-shrinking no man's land, a price band really--one that will eventually disappear as the average cost of producing the extra barrel of oil the world desires goes beyond what consumers including businesses can and will pay."
at 9:59 AM

How is free transit cheaper? Don't you have to make up for lost fare revenue? The answer is that your city will save so much money in other areas, and quality of life will improve so much that you will get back much more than the lost fares. Some examples are listed below. If you want to see specific numbers, see our spreadsheet here.