It seems that when it rains, it pours, especially with elections.

Not that any of them have improved anything for the average person for a long, long time; they have enabled the rich to get richer but I'll save you that one for another time.

The Provincial NDP have a leadership race on right now.  If you're a member, you can vote for their new leader.

I was astonished when one candidate, Dana Larsen, asked me for more info about Fare-Free Transit.  After our chat, he asked that we do a video together.  It's short and concise and I've received very positive feedback from it.

You can view the video here: http://www.youtube.com/watch?v=c3dI-kQgwDA&feature=youtu.be

What inspired me to write this email though, is that Dana has created two platform pledges from this work: making the Skytrain Fare-Free and then converting all of the BC Transit systems to Fare-Free.

He really seems to understand the necessity of moving our transit systems to Fare-Free:
Don't get me wrong: the political/electoral system that is in place will make these kinds of changes next to impossible, regardless of who is elected.

But if you believe in peaceful change from within, then here's a rare opportunity for you.  Fare-Free Transit has happened in many other places in the civilized world, so it could happen here, too.

For more on Dana's and the other candidate's platforms, you can read them here:
http://conservationvoters.ca/leadership-race-2011/ndp-candidates/dana-larsen

If nothing else, spread the news that a potential Premier wants to make it easier for you to take transit!

PS.  In related news, the Ontario Legislature just voted to remove the right of transit workers in Toronto to strike, deeming the TTC an "essential service."  This is on the eve of the Amalgamated Transit Union contract expiring at the end of this month and on the heels of Wisconsin, Michigan, and other US states' legislatures removing the right for public workers to collectively bargain.

ATU Local 113 president Bob Kinnear stated in response to the legislation: "If we are so essential why hasn't there been legislation to properly fund the transit system."
at 10:09 PM

The world powers are fighting over oil and gas. Who controls fossil fuel controls the world economy. The US/EU web of dictators and client states is stretched too thin and cannot contain people's desire for dignity. They are very close to losing Saudi Arabia.

The US/EU puppet for 42 years in Libya refused to step down and had begun the mass murder of civilians. This forced them to step in to save what little is left of their credibility in the region.

Though the demise of the US oil empire is necessary and inevitable, it is not enough to save our species. We must begin to change the tide of public policy right now. Let us start with the abolition of the private auto.
at 10:16 PM

Western powers forced to clean up their mess in Libya

Western developed countries have bet their future on systems that waste energy. This is mainly characterized by autosprawl, a conduit to transfer value from fossil-fuels to the profit margins of just one segment of the economy. The rest of the economy must subsidize the externalized costs such as traffic congestion,  massive paving projects, collisions--broken cars and people, etc. Meanwhile, investment in social capital such as education, and sensible infrastructure such as public transit has been neglected.

The western developed nations must clean up their mess to "maintain credibility" in the words of the U.S. Secretary of State.
at 3:56 AM

Eureka moment came while stuck in a traffic jam 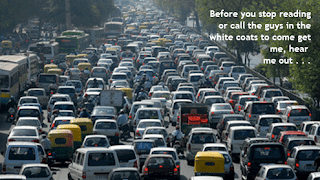 ...So what do we do? It came to me while sitting in a traffic jam: why not make public transit free while providing a whole lot more of it?
Before you stop reading or call the guys in the white coats to come get me, hear me out.
The more people who currently drive that we can get out of their cars and into buses and trains, the easier it will be to get around our roads for those of us who choose to keep driving (or have no other choice but to drive). Fiddling around with a few extra bus routes or a new train line is not going to make a big enough difference. We need radical change or those traffic jams will just get worse and worse and worse.
The first step is to send a strong signal to people by making hopping on a bus or train absolutely free. Cost is not a deciding factor for a lot of people, but it is for some and, more importantly, anything that makes it easier and more attractive to take transit should be adopted....

Carlos Latuff
There is much talk about helping the Libyan people. But western leaders of car-dependent, oil-dependent, countries have not shut down the satellite-TV propaganda vehicle of the dictator. They have not stopped the flow of oil revenue that pays for mercenaries.
They are stalling until they can get control of the next government. They do not care how many have to suffer. They want control of the oil and natural gas.

Do you want to help the people of Libya? Then help expose the lies of the corporate media. End the fossil-fuel and autosprawl subsidies in your local community. Fight for free public transportation. End the tyranny of the private auto.
at 2:07 AM

Koch Industries: Secretly Funding the Climate Denial Machine | Greenpeace USA: "Explore Koch's Web of Dirty Money and Influence
Billionaire oilman David Koch likes to joke that Koch Industries is 'the biggest company you've never heard of.' But the nearly $50 million that David Koch and his brother Charles have quietly funneled to climate-denial front groups that are working to delay policies and regulations aimed at stopping global warming is no joking matter."
at 9:07 PM