TakePart : "Marine plants such as phytoplankton are estimated to produce more than half the Earth’s atmospheric oxygen, according to the National Oceanic and Atmospheric Administration. For the study, Sergei Petrovskii, an applied mathematics professor at the University of Leicester in the United Kingdom, calculated how unrestrained global warming could affect phytoplankton and thus the ocean’s ability to generate breathable air. He ran computer models that looked at what would happen to phytoplankton’s ability to photosynthesize at different temperatures."
at 5:06 PM

Plan to switch cars from oil to electric is a cover for massive #autosprawlsubsidy. Cars generate sprawl and growth regardless of what they burn.


Carlos Ghosn: It's time to get serious about getting the carbon out of our cars: "
The number of vehicles on the world’s roads will more than double from about 800 million today to more than 2 billion by 2050. We cannot continue to rely on fossil fuels to power those vehicles if we are going to avoid the worst effects of climate change.
...Just as significantly, governments around the world are helping stimulate EV demand with various incentives, from cash for trading in old, polluting cars, to free parking and EV access to bus and high-occupancy lanes. The industry is committed to advocating for these and other policies that place a priority on greenhouse gas reduction, including better urban planning that reduces travel growth."

degrowth.de: " is there really anybody who wants to live on a planet that is slowly but surely being choked by cars? Over the last ten years, global car production has almost doubled from 44,554,268 in 2004 to 87,037,611 in 2014. According to recent projections, the total number of cars on earth will increase from 1,2 billions in 2014 to about 2 billions in 2035. The environmental and social impacts of such growth rates cannot be simply compensated by technological solutions, even if all cars were electric and ran on renewable energies. In average, the production of a car causes as many emissions as its (petrol-fueled) usage over the whole lifetime."
at 1:40 AM

Try to imagine your town with no cars

resilience: "The adverse impact of our car-centeredness on the living conditions in the world’s cities is yet another issue hardly ever considered. The massive amount of urban space that cars and their road structures require, the noise that they make and the danger they pose on pedestrians, especially children, are heavily underestimated stress-factors severely affecting our well-being. "
at 11:27 AM

Richest 10 per cent ‘produce half the world’s CO2 emissions 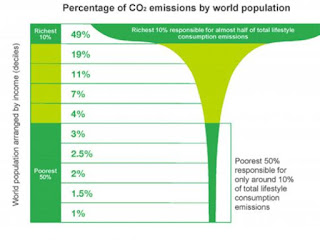 The Independent : "The richest tenth of the world’s population produce half the CO2 emissions, while the poorest half generate just 10 per cent of them, the Oxfam report says."
at 12:54 AM

US Congress votes to continue #autosprawlsubsidy 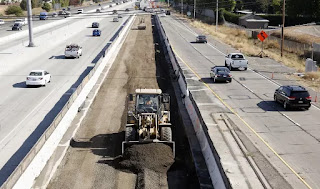 The Washington Post: "Congress did not embrace the obvious solution. Instead, lawmakers resorted to a variety of gimmicks, one-time funding sources and flat-out bad policies to raise the $70 billion they needed to supplement revenue from a frozen gas tax."
at 6:35 PM

Why cooler heads are not prevailing

Ecological debt is what the common people are worried about. Humans have over-used the biosphere and are in grave danger. Seems obvious that to address this would be first. But all we get are charades like COP21.

Financial debt. This is a problem for the elites. We can erase with a keystroke and not miss it.

Infrastructure. Here is the real reason we get nothing but bombing. The world economic system is dependent on liquid fuel and becoming more so. Meanwhile that fuel is costing more energy. But the infrastructure is so massive: tankers, refineries, suburbs, pipelines, highways, and such, that undoing it is a major task. No group of elites is willing to risk losing power by engaging this task.
at 1:23 AM

Here is some real science on #climate. 2 degrees is already impossible.