A group of 291 rapidly growing midsized, middle-income cities in emerging economies are projected to account for more than one-quarter of global income growth and over one-third of energy-related emissions growth in the next two decades, according to a report from The New Climate Economy."
at 7:41 AM

Biggest threat to capitalism -- #degrowth -- causing panic in the elites 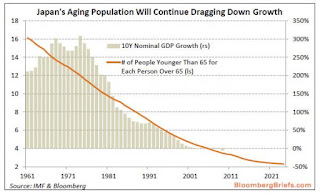 Zero Hedge: "As we have documented before, Japan's demographic crisis has broad implications for the nation. Fewer workers and less labor will reduce the potential output of the Japanese economy, which will increase the country’s reliance on imports as retirees continue to spend, inhibiting GDP growth. The rising number of retirees will strain the government’s welfare programs and the country’s pension funds, which have been major buyers of government bonds. Japan already maintains the world’s second-largest debt load in nominal terms and it's growing."

The hidden costs of #autosprawl 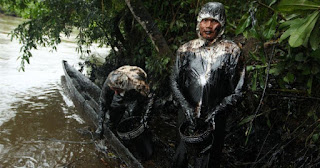 Common Dreams : "A disastrous spate of oil spills in the Peruvian Amazon have gone from bad to worse in recent days, leaving Indigenous tribes frantically trying to clean up the mess left by the nation's state-owned oil company. "
at 9:41 AM

Bloomberg Business: "More borrowers with spotty credit are failing to make monthly car payments on time, a troubling sign for investors who have snapped up billions of dollars of securities backed by risky auto debt.
Delinquencies on subprime auto loans packaged into bonds rose in January to 4.7 percent, a level not seen since 2010, according to data from Wells Fargo & Co."
at 6:41 PM

US and Russia humiliated and helpless in MENA

The superpowers want to get their hands on the low-net-energy oil in Kirkuk, Iraq. Only problem, the Islamic State is in the way.

Bombing isn't working and won't work. Armed militants move around too much. So they bomb civilians and civilian infrastructure.

Between the bombing of civilians and hiring of thugs, the US and Russia are pushing people into the arms of the Islamic State.

US and Russia will not get the Kirkuk oil. They will fail by their own policies.

After ten more years of war, probably China will come in with one man and briefcase and get it.

Email ThisBlogThis!Share to TwitterShare to FacebookShare to Pinterest
Labels: #is

sky.com: "Amnesty International has told Sky News that Russia is guilty of some the most "egregious" war crimes it has seen in decades.

The human rights organisation claims Moscow's warplanes have been deliberately targeting civilians and rescue workers in Syria over the last week."
at 8:02 AM

Email ThisBlogThis!Share to TwitterShare to FacebookShare to Pinterest
Labels: #fakeleft

The US chattering class is busy rethinking the 2003 Iraq invasion.

From 1945 to 1970, the US had cheap oil and extraordinary power. This made it possible for the US population -- 5% of the world population -- able to consume 40% of world resources.

From 1970 to 2005, though US oil production had peaked, world oil production continued to grow. So US power also continued, as everyone needed dollars to buy oil, and cheap oil allowed massive debt-fueled growth. Growth is essential to capitalism, because it holds out hope to billions of people that if the pie grows they will get a slice.

Now the only large reserves of cheap oil left are Saudi Arabia and Kirkuk, Iraq. Saudi Arabia is expected to stop exporting oil in 2030.

There are two ways to handle this problem. War or degrowth. US chose war. How is it working out?
at 2:26 AM

The almighty power of "free" parking.

citylab: "What policymakers didn’t quite understand then, and still don’t now, is the power of the free parking spot to overwhelm transit benefits of any size. TransitCenter recently analyzed the impact of commuter benefits on travel choices in five major cities: D.C., Miami, Seattle, San Francisco, and New York. The analysis found that, relative to a world with no benefits at all, the “net effect of the parking and transit benefits together was more driving.”"
at 9:41 PM

phys.org : "The story is similar when looking at alternatives to fossil fuels in the transportation sector: namely, battery-powered electric vehicles. At the current battery cost of $325 per kWh, the authors find that the price of oil would need to exceed $350 per barrel before an electric vehicle would have a lower cost of ownership than an equivalent gasoline powered vehicle. Unfortunately, oil traded at an average of $49 per barrel during 2015 and is currently trading below $30 per barrel. Thus, batteries need to be much cheaper before electric vehicles could cause reductions in demand for fossil fuels."
at 4:38 PM

The Physics of Energy and the Economy

Our Finite World: "One of the issues in today’s economy is that promises of future energy flows extend far beyond what is formally called debt. These promises include shareholder dividends and payments under government programs such as Social Security and Medicare. Reneging on promises such as these is likely to be unpopular with citizens. Stock prices are likely to drop, and private pensions will become unpayable. Governments may be overthrown by disappointed citizens."

The physics of #climate by @MichaelEMann - (video)

phys.virginia.edu : "I will review the basic underlying science of climate and climate change, including physically-based models of Earth's climate. I will motivate the use of a simple, zero-dimensional "Energy Balance Model" of Earth's radiative balance that can be used to estimate the global mean surface temperature of Earth. I will show how this model successfully reproduces the observed historical changes in global temperature, and how it can be used to assess various questions about future human-caused climate change."
at 6:06 PM