Not a clever social media meme, the war on cars is real, the victims are real, and destruction of the biosphere is a possible result.

On one side, the billionaires, working through the banks, controlling governments and media.

On the other, the people of the world, just trying to survive.

As with any war there are divisions on both sides. The people are divided by nation, "race," gender, and many other ways.

The billionaires are divided by capitalist competition. Some want to preserve the system, others willing to risk collapse for short-term gain.

The most effective weapon against the cars is the fare-free bus. Every little victory counts. When critical mass is reached the car subsidies will be seen as unnecessary. We will eventually get back to walking and biking in cities.

Do not expect hi-profile urbanists, politicians, celebrities, environmentalists, etc to lead this fight. Because they are hi-profile, they are easy victims for the carrot and stick. We have to do this ourselves at the local level.
at 6:01 AM

masstransitmag: "Also, the platform position against any increase in the federal gas tax is not supported by APTA.  The federal gas tax has not been increased since 1993, and consequently, its purchasing power has gone down by more than 37 percent."
at 7:33 PM

Led by the US, governments of the world, representing the top banks, are trying desperately to get to the oil in Kirkuk, Iraq. They have some access to it, but need a secure environment to pump it like they want.

Kirkuk is the last big reserve of easy-to-get oil. Capitalism is clogged with debt and heavily dependent on expensive liquid-fuel infrastructure. Every day a joule of oil costs more joules to produce. In some cases it is costing more to produce than it yields, but they continue at a net-energy loss and create more debt.

Getting the Kirkuk oil will only extend their system another 20 years or so, but they don't think long-term. They have destabilized the entire MENA region and brought great pain and suffering to the people there. Their strategy has been reduced to creating anarchy, leveling cities, and building huge tent cities for civilian refugees. Even Turkey may not escape them.

Even with all their power, a small state, barely two years old, will not let them have relief.

The solution is simple. Get off oil. The quickest and least painful way is to make urban buses fare-free and respond to the people's demand for more buses.
at 12:15 AM

Half of all US food produce is thrown away, new research suggests

The Guardian: "...In more than two dozen interviews, farmers, packers, wholesalers, truckers, food academics and campaigners described the waste that occurs “upstream”: scarred vegetables regularly abandoned in the field to save the expense and labour involved in harvest. Or left to rot in a warehouse because of minor blemishes that do not necessarily affect freshness or quality.

When added to the retail waste, it takes the amount of food lost close to half of all produce grown, experts say.

“I would say at times there is 25% of the crop that is just thrown away or fed to cattle,” said Wayde Kirschenman, whose family has been growing potatoes and other vegetables near Bakersfield, California, since the 1930s. “Sometimes it can be worse.”"

The US food industry requires a lot of energy and resources. What is the benefit of reducing waste? By allowing the sale of imperfect vegetables and fruit, what is the Sustainability Return on Energy Invested? #SRoEI.
at 12:12 AM

Our Finite World: "My analysis has as its premise that the economy behaves like other physical systems. It needs energy–and, in fact, growing energy–to operate. If the system does not get the energy it needs, it “rebalances” in a way that may not be to our liking."

Net-energy is the number of joules converted to useful work minus joules spent. For example, with oil, if X is energy spent finding, drilling, pumping, transporting, refining, distributing, and burning and Y is coming out in motion of a vehicle net-energy is Y - X.

But considering the overall needs of humans, X underestimated and Y overestimated. For one thing Y is usually the energy to move a vehicle. The actual moving of a person is a lot less.

Every day X increases for most energy sources. This is an acute problem with oil which supplies fixed systems that require liquid fuel. The cost of converting these systems is too much.


There are many other factors which if properly calculated for humans would decrease Y and increase X. For example, the costs of carbon emissions, a problem for human life, are generally not included in X.

In addition, because of human financial systems, through debt, joules of Y have been borrowed from the future, so Y will be dropping to pay them back.

Humans will be using less energy, but how painful will it be? The fastest and least painful is dropping birth rates, canceling debt, and stopping growth. By making cities car-free we can speed up two of these.
at 9:30 PM

US, working with Iran, has brought freedom to Ramadi, Iraq

#Ramadi today after it was "liberated" by #Iraq|i Shia forces months ago. pic.twitter.com/OfPZv5exlR 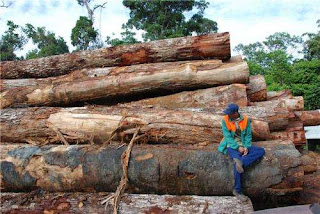 phys.org: "So far, climate change policies on the tropics have effectively been focusing on reducing carbon emissions from deforestation only, not accounting for emissions coming from forest degradation.
Lead researcher Dr Erika Berenguer from Lancaster University said: "The impacts of fire and logging in tropical forests have always been largely overlooked by both the scientific community and policy makers who are primarily concerned with deforestation. Yet our results show how these disturbances can severely degrade the forest, with huge amounts of carbon being transferred from plant matter straight into the atmosphere"." photo by Jos Barlow
at 10:56 AM

US and Iran slaughtered civilians trying to escape the destruction of Fallujah, Iraq. They claim they destroyed a military convoy, but the photos and videos clearly show otherwise.

The fallacy of individual action

​What does it mean to "combat climate change"? | 1 Million Women: "So, it's probably becoming clearer now that our everyday actions can have an impact on how much carbon we produce. What does it matter? Well, our combined carbon footprint is MASSIVE, so if each of us acts to reduce our individual footprint, our collective one will also decrease in size."

The last sentence is only true if everyone in the world were to participate. Otherwise, reduction of emissions in one area simply makes room for more emissions elsewhere. This fallacy is not trivial. Millions of people are assiduously following plans to reduce human footprint. Meanwhile billions are striving for a house and a car.

The solution is to offer people an alternative. Makes cities car-free. That will speed up urbanization. When people get to the city, they have fewer children. That is the quickest route to degrowth.
at 10:05 AM