Because of pipeline vulnerability, fossil-fuel powers will try to crush democracy

Energy proxy-wars are raging. The great powers are desperate to control fossil-fuel energy sources and routes to market. Their problem -- pipelines are almost impossible to secure. That is why they are not even considering any system except totalitarianism. People who want democracy must realize this and not be fooled by their propaganda. 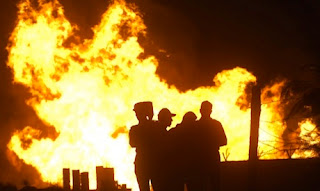 Flames rise from a pipeline distribution station after an attack in Sinai July 12. It was the fourth attack on facilities supplying Egyptian gas to Israel this year. (Photo: REUTERS)

Gas pipeline to Israel and Jordan bombed yet again - Politics - Egypt - Ahram Online: "A short while ago, a huge explosion inside the natural gas inspection station near Al Arish City International Airport rocked the capital of Northern Sinai. The explosion has ignited a huge fire in the pipeline, which Egypt uses to export natural gas to both Israel and Jordan."