arctic-news The loss of this sea ice indicates that the buffer is gone. Sea ice acts as a buffer that absorbs heat, while keeping the temperature at the freezing point of water, about zero degrees Celsius. As long as there is sea ice in the water, this sea ice will keep absorbing heat, so the temperature doesn't rise at the sea surface.

Once the buffer is gone, further energy that enters the Arctic Ocean will go into heating up the water. The amount of energy absorbed by melting ice is as much as it takes to heat an equivalent mass of water from zero to 80°C. 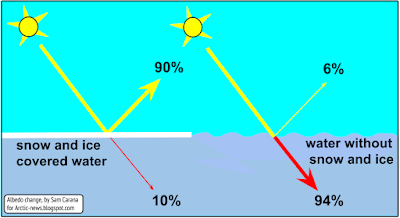