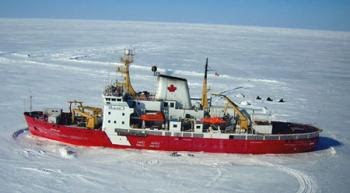 QUEBEC CITY, Canada - In just a few summers from now, the Arctic Ocean will lose its protective cover of ice for the first time in a million years, according to some experts attending the International Arctic Change conference here.

....Burning of fossil fuels contributes about 8.5 billion tonnes of carbon dioxide each year, but the permafrost holds more than 1,670 billion tonnes. 'It's bigger than we thought,' Schuur said in a release.

He estimates that thawing permafrost could add 0.8 to 1.1 billion tonnes per year in the future -- almost as much as deforestation currently adds. Ominously, carbon from melting permafrost is not included in climate models... inter press service via commondreams