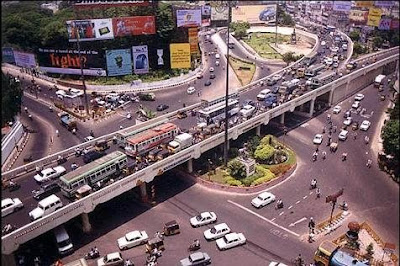 streets of Chennai - seeing green
India has a great thirst for energy. More and more, the energy is being wasted by private autos. A private auto requires large amounts of resources to build, but then just sits most of the time, waiting for its owner to wake up or finish at work. To make it worse the auto promotes sprawl, spreading out structures, costing more energy to heat or cool and get to and from. Even worse, the auto burns a lot more fuel per passenger than a bus or tram.

To feed this thirst for energy. Oil and gas companies are fighting over building pipelines from fossil fuel sources in central Asia. These companies are so powerful, they persuade their national armies get involved. These armies invade and occupy areas of fuel sources and pipeline routes and terrorize on the populations. So people are being terrorized for fuel that is just being wasted.
at 5:41 AM