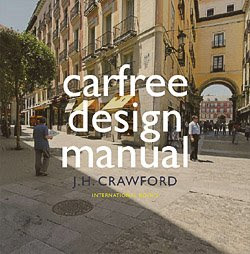 J. H. Crawford is an inspirational writer. His words are powerful and elegant. He has provided leadership when it was not profitable or popular. You can read his work in Carfree Times magazine. Here is an excerpt (An Agenda for Barack Obama).

...Build carfree cities on a large scale. Great effort should go into reconstructing existing cities to operate without cars. The effort is immense and can keep millions of people employed for decades. Use federal lands to build land-grant cities, following the tradition of granting federal lands to achieve public purposes.

Install streetcars in cities with a population of more than 50,000. Keep cars out of their way, so that they can run to schedule. Charge no fare for these services. Attempt to install these systems using a standardized wireless light-rail vehicle....