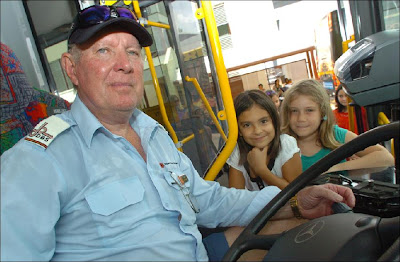 "It's about making sure parents don't have to rely as much on dropping students into school."

When asked if the free transport scheme could be extended to the wider community, Ms Lawrie said the government was only targeting the "most disadvantaged".

"This initiative is a first in the nation, we are the ones who have stepped up to the mark," she said.

The Northern Territory Government’s Free Bus Travel Package is providing free bus travel for Territory students from the end of January, this is added to its decision to offer pensioners free public transport travel from January 1.

This initiative is part of the Northern Territory Government’s plan to extend the bus network and increase public transport use.

All Territory (and visiting Australian students) will travel for free on the Territory’s school and public bus network from Tuesday, January 27, seven days per week.

The Northern Territory is the first in Australia to provide full free public bus travel for students, from primary school students through to University students.