Your social security turned over to #oil industry 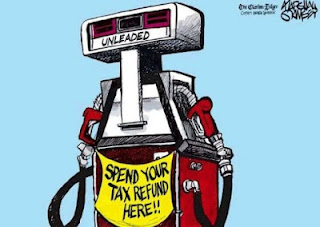 photo credit
Washington politicians think the main-stream media can sell anything to the U.S. public. If gasoline prices go up, what do you think is the effect of taking $100B of social security money, via a payroll tax cut, and handing it to gasoline buyers? Is that supposed to have a downward pressure on prices? If so, then we need to rewrite the laws of economics. No, it is a transfer from money from your retirement to the oil companies.


Rising Gas Prices Give G.O.P. Issue to Attack Obama - NYTimes.com: "“The payroll tax cut provides some cushion for families in case they see their costs go up, possibly because of gasoline prices or for other reasons over the course of the year,” Mr. Krueger said."
...Mr. Obama has also begun once again to express his personal concern for the impact of gas prices on pocketbooks, as he did last week while pressing Congress to extend the tax cut, which is about $40 per paycheck for a family making $50,000 a year.
“If we start seeing significant increases in gas prices, losing that $40 could not come at a worse time,” the president said Tuesday.

Instead why not invest $100B in fare-free public transit. Imagine the impact! It would connect many thousands of job-seekers with small business, relieve parking problems, reduce collisions, reduce traffic congestion, reduce demand for gasoline, reduce medical costs, reduce the need for energy war, reduce road damage, etc. In short, provide immediate and long term benefits.
at 4:14 AM