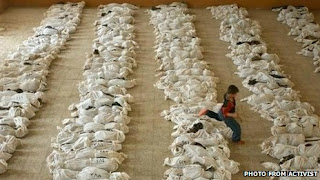 Bodies of children awaiting burial in Syria. Is driving to the McDonalds for a burger worth this to you?

90 killed, including 25 children, in Syria: NGO - Hindustan Times: "Syrian regime forces have "massacred" more than 90 people, including 25 children, in the town of Houla, the Syrian Observatory for Human Rights said on Saturday. Deadly shelling on Friday continued late into the night, the Observatory's Rami Abdel Rahman told AFP. "Many people are fleeing Taldau village in Houla," the Observatory said, adding that residents feared new attacks on the town, in the central province of Homs."
at 4:37 AM