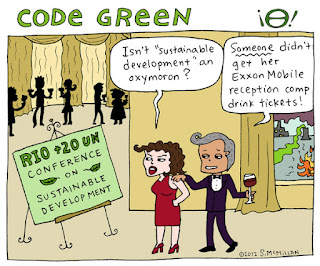 Image Link - Think Progress
George Monbiot – How “Sustainability” Became “Sustained Growth”: "In 1992 world leaders signed up to something called “sustainability”. Few of them were clear about what it meant; I suspect that many of them had no idea. Perhaps as a result, it did not take long for this concept to mutate into something subtly different: “sustainable development”. Then it made a short jump to another term: “sustainable growth”. And now, in the 2012 Earth Summit text that world leaders are about to adopt, it has subtly mutated once more: into “sustained growth”.