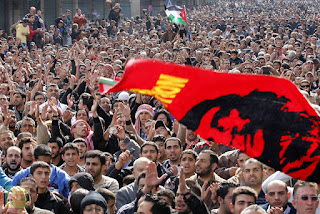 (AFP Photo / Khalil Mazraawi)
US not impressed with Arab spring reaching Jordan? — RT: "With more than 158 people arrested, 71 injured and one killed since the start of Jordanian protests on Tuesday, tonight Amman saw the escalation of the unrest in a way Jordan has never seen. Angry crowds have been shouting out Arab spring slogans and demanding King Abdullah go.
“Freedom, freedom, down with Abdullah,” protesters chanted, despite public insults of the Jordanian King being punishable with time in jail."
at 6:58 AM