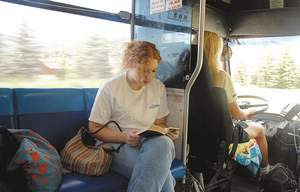 ECO Transit expects to get $1.78 million from bus fares in 2008. That constitutes about 20 percent of ECO Transit’s operating costs. The rest of the $8 million costs to run the system comes from a half-cent sales tax that is shared between ECO Transit and ECO Trails.
A free and expanded bus system is feasible, Taylor said, but it would require getting funds from elsewhere.
One option would be adding half a cent to the existing half-cent transit sales tax to help fund the expansion, something that would have to be voted on by the public. Summit County has a free bus system that is funded by a similar tax.
The idea of a free bus system and a sales tax is something the county would need to see if the public would support, officials said.Other funds could come from impact fees charged for new construction or additional federal grants. VailDaily - Aug 14 2008.