Vietnam turns to public transit to save money, lives, environment 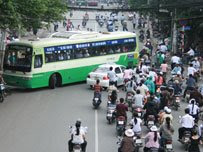 Starting next month, around 100,000 city officers would be asked to use buses or non-engine vehicles to go to work at least once a week.
The campaign is set to be applied to all residents in early 2009, the city said.
In initiating the project, the city aims to save around VND4.6 trillion (US$278 million) per year and reduce environmental pollution, Duong Hong Thanh, deputy director of HCMC’s Department of Transport, said at a meeting Tuesday. thanh
nien news