The answer is blowin' in the wind 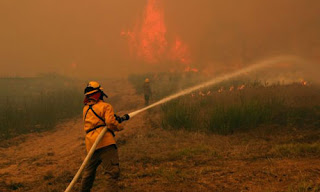 Firefighters in Smithville, Texas: Governor Rick Perry, has called climate change an 'unproven theory' while wildfires ravage his drought-scorched state. Photograph: Erich Schlegel/AP
Hurricanes, floods and wildfires – but Washington won't talk global warming | Jules Boykoff | Comment is free | guardian.co.uk: "We're living in unconventional political times in the United States, so it's time to dispense with conventional political thinking. Climate scientists are telling us with increasing confidence that the impacts of climate change are already playing out, and not just in the Antarctic where photogenic ice shelves are clattering into the sea. Climate change is already expressing itself as wild weather. It's blowing in the wind."