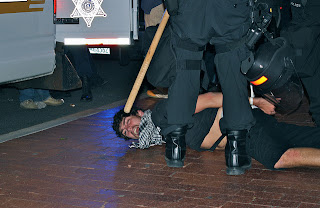 occupyboston
Occupy Boston: "At 1:30 this morning hundreds of police in full riot gear brutally attacked Occupy Boston, which had peacefully gathered on the Rose Kennedy Greenway. The Boston Police Department made no distinction between protesters, medics, or legal observers, arresting legal observer Urszula Masny-Latos, who serves as the Executive Director for the Massachusetts branch of the National Lawyers Guild, as well as four medics attempting to care for the injured."