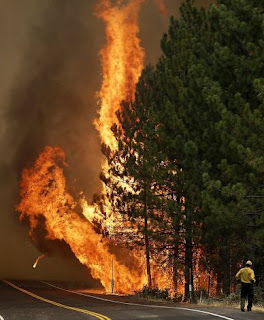 (AP Photo/Jae C. Hong) Yosemite
Why? The U.S. has no choice. Like a tractor-trailer with no trailer brakes being pushed by its load, the U.S. government has no choice but to get more militarily involved in Syria. Oh, there will be protests, yes, but as long as the U.S. economy is dominated by car-dependency, control of energy resources is not negotiable. If Russia and China get enough power in the middle east to control world gas and oil prices, they will have the U.S. at their mercy.

What can we do? If you are driving your car to a peace march, pull over and think. Then, go back to your town and fight for free public transit. Or, move to the city if you can, sell your car. Join your local transit riders union, write a blog post (we will post it) exposing sprawl subsidy in your region. If you are a multi-car family, you might get rid of one car and use car-sharing occasionally. There is plenty to do.

Either we end the demand for #autosprawl and its consequent energy waste, or we will go down in blazes of constant war.
at 3:33 AM