#Freetransit so popular in Bangkok, even right-wing government declined to cancel it 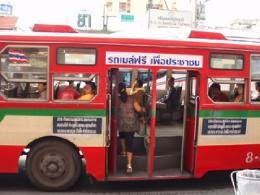 Khaosod Online: "The program had proven so popular that the preceding government of Ms. Abhisit Vejjajiva repeatedly renewed it, in spite of the Democrats′ self-proclaimed opposition toward "populist" policies of Mr. Samak.