People who were around in the 1950's in the US will remember that Islam was just another religion then. Saudi Arabia was a good friend--only lightly criticized occasionally.

Since then, the US has waged a constant and escalating war on Islam.

But Islam is fighting back, and the old 9/11 false flag is getting tattered. What to do. Well, the corporate media frame is: "Islam is brutal! "Now the US has to "save the Yezidis." Huh? A tribe that Americans have never heard of, that just happens to live on top of the largest remaining reserve of easy-to-get oil. Don't think too many took that seriously.

Islam, in the face of global economic and climate collapse, is offering a path to heaven. 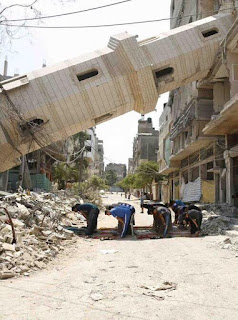 The US is offering? What? End brutality by bombing hospitals?

Another path is possible. The US could make urban buses and trams fare-free. What would happen? Immediately demand for oil would drop. The oil industry would lose customers. People would find cities more desirable, with room for permaculture. The birth rate would fall faster, meaning less energy converted to heat. US would be a shining example to the world.