West out of spies 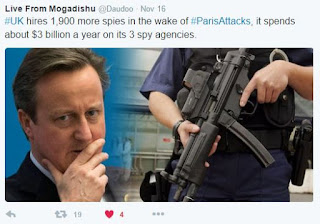 The grandchildren of colonial missionaries of the US, EU, and UK, have passed on. As children they learned to local languages of the world on the streets and playgrounds as they spoke English at home. With their intimate knowledge of idioms and vernacular, some became loyal spies for the west in the age of oil.

Now who can be trusted as interpreters as the west seeks to protect sources and routes for oil and gas around the world?

China has over 300 million English speakers who also understand the built-in encryption of the Chinese language. Who will be a trusted spy for the west against them?

It's time for a 180 degree turn. Bombs don't work. Empire doesn't work. The US should show the way and start dismantling sprawl and car-dependency [autosprawl] before this all blows up in its face.
at 2:12 AM